Robert Kiyosaki was born in Hilo Hawaii in April 1947. in 1957 at age nine years
old, little Robert was attending the same public school where the rich people sent
their children for his town had lots of doctors, business owners, and bankers
Robert saw that the rich kids would separate themselves from him for his
family wasn't able to afford the newest collections of toys and bikes like them.

So one day Robert asked his father who had PhD completed multiple
universities with excellent degrees, "Dad, can you tell me how to get rich?"
Unfortunately, his dad didn't know the right answer because he was a rich
himself, so he responded with, "Well, use your head, son." "Stay in school, get good
grades so you could find a safe and secured job. His real dad is what he'll be
referred as poor dad. He wasn't poor at this time, in fact, he was making lots of
money, but in the end, this man's financial life takes a turn for the
worse. Now little Robert has a friend named Mike and which Mike's father would
be referred as rich dad. Who started mentoring Robert and his son Mike about
how to really become rich. At this point in time, rich dad wasn't really rich yet
but soon became to be one of the wealthiest men in Hawaii. 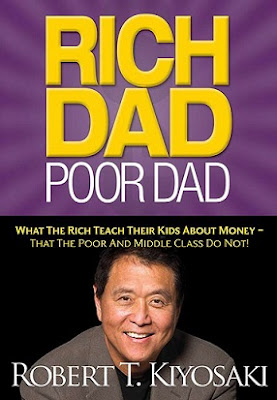 So then, what did rich dad teach Robert? Rich dad poured a strong financial foundation into
these kids mind of many important principles. To start off, the first lesson
you need to know is you must know the difference between an asset and a
liability.

You need to buy assets. If you want to be rich this is
all you really need to know and understand the most! You see, the rich
acquire assets and the poor and middle class acquire liabilities but sometimes
they think they are assets. The primary cause of financial struggle is simply
not knowing the difference between an asset and a liability. You don't even
know what an asset or liability is don't you? An asset is something that puts
money in my pocket. A liability is something that takes money out of my pocket.

For instance let's try cash flow pattern of a normal
individual. This person right here earns his income from a job and as
expenses are things like food, clothes, entertainment, and transportation
Unfortunately he doesn't have assets but sure does have liabilities that
constantly takes money out of his pocket because things like mortgages, taxes
credit cards, loans and believe it or not the house.

Now let's take a look how to cash flow pattern really works for the rich. Instead of looking to earn more
money from their normal job as the only source of income, they buy and own assets
that brings money into their pockets as a form of passive income. Passive income
is something that earns money that doesn't require you to trade your time
for it, so in other words you would be earning money even as you're sleeping.

Examples of assets are businesses that doesn't require your presence such as stocks
bonds, mutual funds, income generating real estate, royalties, notes, and anything
else that has value that produces income.

As mentioned before, poor dad was making
quite a lot of money from his job but his expenses seemed to always keep up
with his income, never allowing him to invest in assets. As a result his
liabilities such as his mortgages and credit card debts grew greater over time
and this is the fault of having income equals expense and assets is less than
liabilities and sadly this is what drove poor dad into debt even after he passed
away.

On the other hand, rich dad's personal financial statement reflects
the result of a life dedicated to investing and minimizing liabilities so
he has income that is greater than the expense because of assets is greater
than liabilities. This is practically why the rich are getting richer! Their assets
generate more than enough income to cover expenses with the balance
reinvested into the asset column. The asset column continues to grow and
therefore the income grows with it.